The Purpose of the Cleveland Bonsai Club

The purpose of the Cleveland Bonsai Club is to study the development of trees and shrubs as Bonsai, and to share the joy of a close, ongoing connection to nature in the creation and nurture of these living works of art.

Bonsai is a continual learning experience, and the Club provides a setting for people of all ages, from beginners to skilled designers, to participate in the rewarding pursuit of this lasting beauty.

Over the years the CBC grew into one of the most successful and prestigious clubs of its kind, with more than 125 members at one point, and earning recognition in Bonsai circles worldwide.

The Cleveland Bonsai Club has had the distinction of having several Bonsai Masters in our midst from early on. One such Master was Keith Scott, who joined the club in 1963. Under his wing several members flourished and developed their skills as apprentices, later achieving master skill levels. We continue to enjoy the benefit of the expertise they share with us. 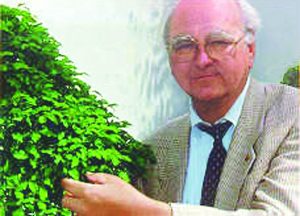 To Keith Scott–with our thanks

Friend, mentor, raconteur, curmudgeon…
and above all, teacher.

His approach to bonsai was unique. Keith always valued original work over the refining of imported stock. His wit and talent as a lecturer took him all over North America as one of the most popular speakers the world of bonsai has ever produced. That ever-present wit – charming, literary, biting or whimsical, as the spirit moved him – peppered every demonstration, workshop and ordinary conversation.

Keith’s participation in the early years of the Cleveland Bonsai Club helped to establish it as one of the premier clubs in this country. He was generous with his extensive knowledge, and quick to offer encouragement and praise. Yet this uniquely talented and intellectually gifted man never truly understood how profoundly he touched so many of our lives.

Quoting Shakespeare or creating breathtaking bonsai, Keith’s was a life dedicated to leaving the world a richer, more beautiful place.

“…thy eternal summer shall not fade.”
Sonnet 18